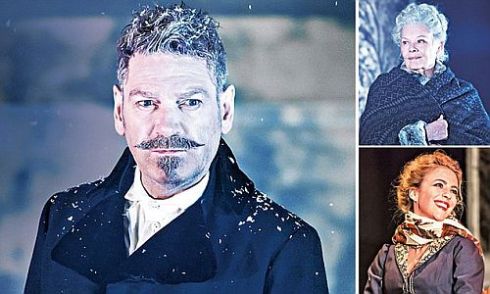 The nights are drawing in, there’s a chill in the air and thoughts are already turning to Christmas. In theatre-terms this can only mean one thing, it’s time to shuffle our Shakespeare plays by packing away the flighty summer plots of A Midsummer Night’s Dream and Much Ado About Nothing and turn to something considerably darker. Instead out comes Macbeth (we’ve already had an astonishing film and a new Young Vic interpretation opens soon), Twelfth Night and The Winter’s Tale– the first of the Kenneth Branagh Theatre Company productions to hit the West End stage (followed by Harlequinade / All On Her Own in rep which I’ll post next week).

This is probably one of Shakespeare’s most bonkers stories whose merits cause considerable disagreement among scholars and critics. The Winter’s Tale is the story of King Leontes who in the midst of happy celebration accuses his wife Hermione of betrayal with his long term neighbour and friend King Polixenes and suggests that the baby she is carrying is his. Leontes has her arrested and Polixenes is chased from the Kingdom after his friend demands his assassination. Born in jail, the child Perdita is denied by Leontes and abandoned in the wildnerness, left to the Gods to decide if she is legitimate while untold miseries are heaped on her father. 15 years later bereft all he once held dear will the now teenage Perdita be found and can an astonishing piece of magic ensure Leontes is forgiven?

Kenneth Branagh’s enchanting production is bursting with Christmas magic from the moment the sounds of a music box fill the auditorium as the curtain rises. Christopher Oram’s stunning design is a marvel, merging Dickensian costume with the Imperial majesty of the nineteenth-century Russian court sumptuously realised in a palette of deep red and white. But the beautiful surface sits perfectly at odds with the poison at the heart of the Court. The first two Acts which form the first half of this production are as perfect as theatre can be, riven with tension and almost suffocatingly emotional as Leonte’s Othello-like possessiveness consumes him. Branagh and Ashford direct with incredible pace that overlaps scenes to give a sense of the speed at which events escalate and this whole first half is utterly gripping.

The second half opens with Time’s monologue lit through a twinkling screen that is a memorable stage picture, as is the final Act opening with Leontes facing away from the audience, utterly still in the middle of his now glittering white palace as snow gently falls upon him. Oram’s once luscious court now cold and desolate reflects Leontes’s frozen heart and endless grief. If there is one duff note it’s the idyllic pastoral scene that comes between these two sections that seems like another play entirely. Mostly this is Shakespeare’s fault, as if he wrote a tragedy and was told to lighten it up a bit for Christmas and so inserted what looks like a hoe-down in the middle. Although performed well, this production, neither in style or design, can quite reconcile its enormous change of tone from the brilliance of what came before.

The Winter’s Tale is of course famous for a stage direction about a bear chase and this is brilliantly achieved with a flash of projection on a momentarily suspended curtain before being whipped away. Although the confines of the text prevent this as after the interval 15 years have passed, it seemed a shame not to take the interval on this shocking note. Greg Doran’s Hamlet in 2008 defied convention by stopping in the middle of a line, so it would have been fascinating to play with expectations here too. It means the subsequent comedy scene with the country folk falls a little flat after the breath-taking tension of the court. But these are minor quibbles.

As you would expect, the performances are largely outstanding and for many the chance to see Kenneth Branagh and Judi Dench on stage together is irresistible and it is a privilege to see them together. Branagh is superb as the tormented Leontes showing us how his initial suspicions grow into certainty, anger, rage and then tyranny. During the scene with Camillo (John Shrapnel) during which he raves about his discovery, Branagh is so unhinged and dangerous it will make the hairs on the back of your neck stand on end, but he is also incredibly moving as grief overwhelms him in the later scenes, particularly in the final section. It’s a brilliant performance.

Branagh is absolutely matched by Judi Dench as Paulina, ardent supporter of the Queen’s innocence and Dench makes her at once maternal, fiercely protective and outspoken, unafraid of the monarch who has betrayed Hermione. Her grief is also deeply felt and it’s impossible not to be moved by her delivery of tragic news. The supporting Court performances are also superb, including John Shrapnel as a commanding Camillo and Michael Pennington as Antigonus whose loyalty and devotion to their monarch is well played. Miranda Raison brings a valuable statuesque quality to Hermione who never cries but shows considerable dignity and possession throughout her ordeal. All the performances in the pastoral section are also good and play to the crowd but somehow still that whole section is less engaging.

The Winter’s Tale is London’s perfect theatrical Christmas present, uniting a magical story with wonderful performances, beautiful design and a chance to see two of our finest actors. The whole thing is beautifully realised and for those looking for a festive story that has a little more gravity than a panto then this is certainly for you. It is largely sold out but a cinema broadcast is scheduled for 26 November. It may be cold and damp right now but this production will send you out onto the London streets with a warm glow in your heart.

The Winter’s Tale is at the Garrick Theatre until 16 January. Most of the tickets are sold out but do check for returns, and there’ll be a Cinema Live broadcast on 26 November. Follow this blog on Twitter @culturalcap1

This blog takes a more discursive and in-depth approach to reviewing a range of cultural activities in London, primarily covering theatre, but also exhibitions and film events. Since 2014, I have written for The Reviews Hub as part of the London theatre critic team, professionally reviewing over 800 shows in that time. The Reviews Hub was established in 2007 to review all forms of professional theatre nationwide including Fringe and West End. My background is in social and cultural history and I published a book entitled Air and Sea Power in World War One which examines the experience of the Royal Flying Corps and the Royal Navy. END_OF_DOCUMENT_TOKEN_TO_BE_REPLACED
This entry was posted on Monday, November 16th, 2015 at 12:25 pm and tagged with capital, Christopher Oram, culture, Garrick Theatre, Greg Doran, John Shrapnel, Judi Dench, Kenneth Branagh, Kenneth Branagh Theatre Company, London, Michael Pennington, Miranda Raison, Play, review, Rob Ashford, The Winter's Tale, theatre, William Shakespeare and posted in Culture, London, Play, Review, Shakespeare, Theatre. You can follow any responses to this entry through the RSS 2.0 feed.
« The Crime Museum Uncovered – Museum of London
The Homecoming – Trafalgar Studios »