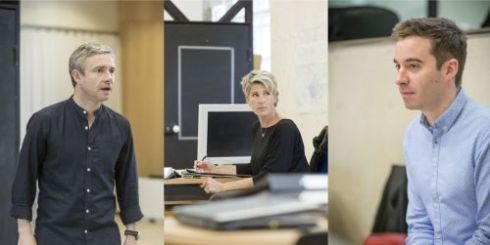 More than 90 years since its first ever period in government, the Labour Party has spent the majority of its existence in opposition and riven by immobilising debates about whether it should honour its left-wing roots or move towards a central populist position. Such intricate divisions are not the preserve of Labour of course – The Conservative Party has torn itself to pieces arguing about Europe on many occasions – but within Labour a fascinating clash of fundamental idealism is a constant feature, and one which writer James Graham looks to explore in his insightful new play Labour of Love.

In a reasonably short time, Graham has become one of our leading proponents of political theatre, commenting not just on the Parliamentary system in plays like This House, but also the wider Establishment in his huge 2017 hit Ink about the early days of The Sun, as well as the forthcoming examination of the television media in Quiz. Graham’s work focuses on crucial moments of change and the ripples that these cause decades later. It always starts with an institution holding power in a present-day scenario and attempts to unpick the various strands that brought about this influence, whether it be the ongoing power of tabloid journalism, or in the case of Labour of Love, understanding the anatomy of a major political party whose current resurgence could be about to break a century-old cycle of behaviour.

The play is set in a safe Labour constituency, examining 27 years of party history using a reverse chronology structure in Act One to take MP David Lyons (Martin Freeman) from results night in the 2017 General Election, right back to his very first win in 1990, with pit stops in 2010 and 2003, while Act Two starts in 1990 and takes the audience right back up to date. And while that sounds rather dry, at the play’s heart is the developing relationship between the moderniser Lyons, a protege of the Blair years, and his election agent Jean (Tamsin Greig), wife of the hard-line leftist MP he replaced.

At the start of the play David and Jean have the exasperated affection of years spent sparring with one another, her keeping the show on the road and challenging his abandonment of party tradition, while David has enjoyed the rollercoaster of Westminster while trying to convince his constituents that being electable and being Labour are not mutually exclusive. Why these people have become who they are and the exact status of their combative relationship is slowly revealed as we travel back to their beginning in an attempt to understand what their future will be.

One of the things that distinguishes Graham as a writer is his ability to construct plays that maintain their narrative drive, drawing the audience into the humanity of his characters while still making significant observations about where power lies in our society. But rather than hammering home his message, Graham utilises a light touch approach to the politics, wrapping it in humour and careful character development.

Construction may seem a basic skill for a playwright, but it’s not as straightforward as it sounds, and Graham is a master at controlling an unfolding story and creating interlocking scenarios that work together to form a complete picture. Ink used a series of overlapping scenes, music segments and abstract elements to conjure up the world of 60s journalism, while in Labour of Love, Graham has four semi-independent stopping points, each with their own mini-plot and cliff-hanger, resolved in the second half, so by the end these fleeting visits to each decisive moment in Labour’s recent history have also satisfactorily coloured-in the 27 years of Jean and David’s lives as well.

Normally you need only turn on the news to see the kind of comical and ridiculous behaviour from our politicians you would never believe if it was on stage, but Labour of Love mines a long satirical traditional of holding our leading officers to account. It is a political farce with plenty of humour and packed-full of audience-pleasing and sharply observed references to pop culture that litter the three decades in which the play takes place. Some of the high points include a complaint from Jean that northerners always get the rough end of the deal, ‘it’s like Game of Thrones’ she quips, and waiting for a fax machine to reveal if David has betrayed the local party in the leadership election. The carefully chosen music from D:Ream’s ‘Thing Will Only Get Better’ to Britney Spears ‘Hit Me Baby One More Time’ will  also take you right back in an instant to the four eras created on stage.

Supporting this is Lee Newby’s purposefully drab constituency office set which uses the stage revolve to move between decades. It’s soulless and even in 1990 well worn, grey floor tiles and the same drawer that doesn’t open properly for 30 years. But it’s in the tiny details that the changing period comes to life as fax machines give way to computers with email, boxy televisions with actual Teletext (leading to one audience cry of “bring it back”) become flatscreens, and crucially the image of the then Labour leader changes, framed on the office wall with Jeremy Corbyn looking quite regal in his 2017 photograph – an image clearly chosen with particular care to emphasis his role in debate between left and centre that continues to divide his party while whipping up a popular acclaim.

At the centre of all of this is Tamsin Greig playing Jean Whittaker, replacing Sarah Lancashire at relatively short-notice which led to a week of previews being cut. None of the backstage drama is evident though, and Grieg makes it feel like the part was written especially for her. Old Labour to the core, Jean is both a thorn in David’s side and the person keeping him afloat, never missing an opportunity to score a point. But across the years we see she develops a respect and care for him that becomes surprisingly touching, and under the prickly and deeply sarcastic demeanour, Grieg reveals Jean’s deeper emotions emerging from a lifetime of disappointments and limited opportunities for herself as she serves a succession of argumentative men.

Jean is also passionately devoted to the needs of the community, rather than the demands of the central party, which leads to much of the division with David, giving her a combative shell. But she is also the link between the MP and the grass roots support which she navigates with skill, and Grieg offers a picture of an incredibly smart woman, easily outwitting the smug Londoners, and teaching them the difference between party power and electoral support.

Martin Freeman’s David is actually a genuinely nice man, hugely out of his depth in the safe seat he’s parachuted into. New Labour through and through he’s passionate about making his party electable and frequently campaigns for the compromises needed to win and keep power in Number 10. The pull of local and national politics, is embodied in Freeman’s performance as David struggles to balance the growing loyalty he develops to the people he represents and his greater ambitions for personal authority and a Cabinet role.

As the years go by – or in this case backwards and then forwards again – Freeman shows how the optimism of David’s first election fades over the years, becoming not quite jaded but more aware of the cyclical nature of power and how quickly new initiatives fail, with pointed reference to the closure of a mine that became a data centre which itself became redundant. Freeman’s David is someone trying to do his best in the wrong constituency, torn between an expectant future and the grim reality of brief influence and then obscurity. ‘I’d better brush up on my Paso Doble’ he remarks as the wrong kind of glittery future beckons.

Arguably the supporting characters are little more than sketched, but Rachael Stirling has lots of fun playing David’s snobby London wife Elizabeth, who sneers at his lack of ambition, frequently going head-to-head with Jean and losing. Susan Wokoma and Dickon Tyrrell add texture as grassroots party members who clash with David, but help to create the context against which the two leads exist.

With press night tomorrow, the flow and comic timing – already working well – can only tighten as the run continues. Perhaps it doesn’t quite have the impact of Ink, one of those rare plays that just captures the imagination, the extra magic that separates the 5-star show from the plethora of 4s, but Labour of Love remains a well-constructed and perceptive comedy that explains why political parties so often tear themselves apart. James Graham is fast establishing himself as our leading political playwright, and Labour of Love is full of insight, deep research and with Graham’s distinctive ability to entertainingly interpret post-war history.

Labour of Love is at the Noel Coward Theatre until 2 December 2017. Tickets start at £10. Follow this blog on Twitter @culuralcap1

This blog takes a more discursive and in-depth approach to reviewing a range of cultural activities in London, primarily covering theatre, but also exhibitions and film events. Since 2014, I have written for The Reviews Hub as part of the London theatre critic team, professionally reviewing over 600 shows. The Reviews Hub was established in 2007 to review all forms of professional theatre nationwide including Fringe and West End. My background is in social and cultural history and I published a book entitled Air and Sea Power in World War One which examines the experience of the Royal Flying Corps and the Royal Navy. END_OF_DOCUMENT_TOKEN_TO_BE_REPLACED
This entry was posted on Monday, October 2nd, 2017 at 11:29 am and tagged with capital, culture, Dickon Tyrrell, James Graham, Jeremy Herrin, Labour of Love, Labour Party, Lee Newby, London, Martin Freeman, Noel Coward Theatre, Play, Political History, political theatre, Rachael Stirling, review, Susan Wokoma, Tamsin Grieg, theatre and posted in Culture, London, Play, Review, Theatre. You can follow any responses to this entry through the RSS 2.0 feed.
« Basquiat: Boom for Real – Barbican
Journey’s End – London Film Festival »