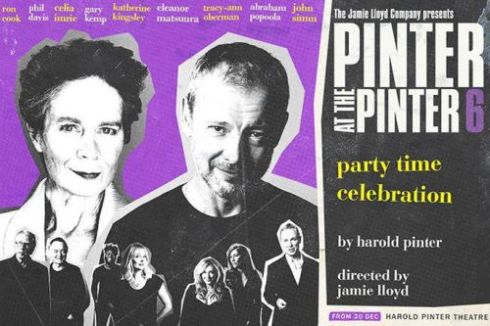 As the annual party season draws to a close we are all exhausted from a least a month of Christmas drinks, official office parties and socialising with everyone we’ve ever met before the symbolic chasm beyond the 25 December. One last hurrah on New Year’s Eve to see out a year no one particular wants to remember will be replaced with diets, detoxes and a month at home to recover from the financial strain of the festive period. What better time then to consider all the things we really hate about forced social gatherings – the one-upmanship, the sniping couples and the self-congratulation all concealed under a thin veneer of social expectation and small-talk.

The penultimate Pinter at the Pinter collection is another superbly insightful double bill uniting Party Time from 1991 with Celebration from 2000. This is Pinter as a social commentator subtly examining the slightly falsified nature of the party set-up, suggesting much about the complex nature of human interaction and revealing character traits through conversations full of class, gender and political meanings. Presented to a now socially-jaded late December / early January audience these are two parties you’ll be glad to observe from the safety of your theatre seat.

Back at the helm after temporarily handing-over the directorial reins, you know instinctively that this is a Jamie Lloyd production as soon as the curtain rises. Gone are the gentler themes about love and loss, and instead we return to contrasting shades of darkness and light. Where Soutra Gilmour’s revolving cube has been used to give previous collections movement and verve, here both plays have a deliberate static quality, similarly presented front-on with the actors placed in a row facing the audience. How Lloyd uses this to create two dynamic gatherings that emphasise Pinter’s focus on the dangerous nonsense of social climbing is fascinating.

Opening with Party Time Lloyd and Gilmour create a vision more akin to a funeral than a twinkly upper middle-class get-together, but for good reason. Pinter’s story is all about the ways in which the accumulation of wealth depends on the exploitation of those in the lower social order and how vulgar the conversations about holidays and tennis clubs, a heartless display of status really are, suggesting an emptiness at the heart of these interactions. Here, while peacocking, the characters reveal a ruthless approach to protecting their own privilege and a refusal to see beyond the limits of their comfortable existence, a purposeful blindness about how their lifestyle is sustained.

The attention to detail here is very meaningful, and Gilmour’s party venue is a black room, with black chairs, with a set of double black doors at the rear centre through which the external world occasionally tries to break through. She dresses each character in a carefully chosen black outfit and shoes while even providing quite specific brunette wigs to a number of the actors to create a soulless and bleak community governed by a particular set of rules about conformity, which links nicely to the political themes and faceless governing elite of Pinter One.

Lloyd carefully places his actors in particular spots on the stage, the women seated on the outer edge to reinforce the male-dominated secret society idea that comes through strongly from the script, an ominous bunch ‘taking care’ of events beyond this room – a hint of revolution in which police cordons and traffic checks delay arrivals at the party –  and rapidly shutting down any reference to the events beyond. For the men of this elite set knowledge is power and the emphasis is squarely on ‘need to know’, so information is presented to the other characters and the viewer only where it serves the progress of the story, frequently without further context, for example when Dusty is abruptly told she cannot mention her missing brother.

To reiterate this idea of party and society as a form of constructed artifice, full of tacit rules and expectations, Lloyd shies away from a more traditional staging with conversations happening around the stage and instead seats all the actors in a single line, with the relevant combinations stepping forward to deliver their scenes before resuming their place in the frozen line-up. The effect of this is quite extraordinary, showing the multiple strands of conversation occurring in this room between semi-strangers, while cutting sharply between pockets of information to draw out their strange lack of reality. We’ve seen this in several of the earlier Pinter collections, the idea that this world exists slightly out of time with everything beyond the black doors, and, for some time, each interaction here also appears to be separated from the others, sets of lives happening in parallel in the same room but in their own vacuum.

The deconstructed staginess that Lloyd brings is cleverly utilised to underscore Pinter’s views on this type of party and its people supported by another fantastic ensemble cast. John Simm has such an natural feel for Pinter’s rhythm and after enjoyably dark performances in The Hothouse and The Homecoming, both for Lloyd at the Trafalgar Studios, here his angry banker Terry is full of rage in which Simm draws out the brutality of the man who verbally berates his wife and hints at a joy in physical violence beyond this room while talking about his favourite health club.

Simm is supported by Eleanor Matsuura as Dusty, Terry’s wife who married-up and struggles to cast-off the thoughts of her own family and class while chafing under Terry’s rule, Phil Davis as party host Gavin inducted into this particular social circle through his appreciation of the health club, Celia Imrie as Dame Melissa whose scathing comments on the nearby town are so revelatory for the audience, Ron Cook and Katherine Kingsley as couple Douglas and Liz whose only connection seems to be their children, and the wonderful Tracy-Ann Oberman as widow Charlotte reunited with Gary Kemp’s Fred – all of them reasonably oblivious to anything but their own immediate circumstances.

Pinter uses the 35-minute Party Time to comment on the unsatisfactory nature of marriage and the rapid descent into indifference or outright disdain. These themes are even more prevalent in Celebration, essentially a sex-comedy set in a restaurant during a wedding anniversary dinner as two sets of tables (a foursome and a double) explore past lovers, jealousy and the failure of their current relationships. As with Party Time the tone suggests something amiss, but Pinter, in his final play, draws out the crass nature of his characters more overtly as the self-congratulation gives way to more dubious moral undercurrents.

Lloyd stages this 40-minute play almost as the inverse of the earlier production with a visual palette that confines black to the back of the stage and instead uses gold, white and silver to create a gaudy nouveau riche world of shiny fabrics and visible wealth – and note Gilmour replaces the brunette wigs with blonde for most of the women and their natural silver of the men. Seated at a banquet-style table facing the audience, couples Lambert and Julie are celebrating their anniversary separated by fellow twosome Matt and Prue who have joined them for the evening. At either end of the table at right angles to the audience, Russell and Suki form an entirely separate conversation, and Lloyd controls the traffic between the initially separate scenarios with lighting changes, freeze frame techniques and a subtle musical flurry.

This set-up allows Lloyd to place a physical distance between the sparring couples (with the exception of the relatively happy Matt and Prue who sit side-by-side) that emphasises the considerable emotional separation they are experiencing. At several points Ron Cook’s dislikeable Lambert either pretends not to know his wife or acts with notable disrespect towards her including mention of earlier sexual conquests. There is an evident vulgarity in the way Cook’s Lambert carries himself, flaunts his wealth and holds court at what should be a celebratory dinner, clearly indicating a self-made man who constantly betrays his more-lowly origins.

These notions filter through the group and while both Oberman’s Julie and Imrie’s Prue are expensively dressed, Gilmour’s choice of shiny ruched fabrics and piles of elaborately coiffured hair equally suggest money without taste, they drip with expense but their obvious flashiness implying, deep-down, a discomfort or surprise at their sudden fortune that they have been unable to cultivate. While the characters in Party Time oozed a classical elegance and comfortable entitlement that stifles any real feeling, here this brash group open-up their thoughts and feelings as easily as their wallets.

The theme of sexual jealousy comes from the other table as Kingsley’s Suki dines with partner Russell played by Simm. Here we discover a path for young women from secretary to boss’s wife behind the filing cabinets of the offices in which Suki once worked. As the two stories collide, Pinter comments on marriage, attraction and our inability to fully escape our own past – especially, for women, the stain of former lovers – as the characters endure an uncomfortably forced period of social interaction into which Lloyd allows only minimal movement, reflecting the confinement of the life they have built for themselves. All of this is interspersed with more wordly musings from the waiting staff (Abraham Popoola and Matsuura) and Kemp’s restaurant manager who subvert social expectations to some degree; the people with money have neither education nor class, while the people without have both.

Together, the one Act plays that comprise Pinter Six are a condemnation of the falsity of politeness and the extent to which excessive amounts of money allow groups to mask terrible and immoral behaviours. These brilliantly staged pieces are the shortest of the set to date and contain the least motion from the actors, yet the purpose of Lloyd’s still and contained approach is extremely well and atmospherically realised by a top-notch cast who bring such clarity to Pinter’s social commentary. The Pinter at the Pinter season is now alas on the home straight and as we embrace the clean-living principles that come with each New Year, keep a little in reserve because you’ll be want to accept an invitation to this wonderful Pinter party.

This blog takes a more discursive and in-depth approach to reviewing a range of cultural activities in London, primarily covering theatre, but also exhibitions and film events. Since 2014, I have written for The Reviews Hub as part of the London theatre critic team, professionally reviewing over 800 shows in that time. The Reviews Hub was established in 2007 to review all forms of professional theatre nationwide including Fringe and West End. My background is in social and cultural history and I published a book entitled Air and Sea Power in World War One which examines the experience of the Royal Flying Corps and the Royal Navy. END_OF_DOCUMENT_TOKEN_TO_BE_REPLACED
This entry was posted on Monday, December 31st, 2018 at 12:30 pm and tagged with Abraham Popoola, capital, Celebration, Celia Imrie, culture, Eleanor Matsuura, Gary Kemp, Harold Pinter, Harold Pinter Theatre, Jamie Lloyd, Jamie Lloyd Theatre Company, John Simm, Katherine Kingsley, London, Party Time, Phil Davis, Pinter at the Pinter Season, Pinter Six, Play, review, Ron Cook, Soutra Gilmour, theatre, Tracy-Ann Oberman and posted in Culture, London, Play, Review, Theatre. You can follow any responses to this entry through the RSS 2.0 feed.
« Pinter Five: The Room/Victoria Station/Family Voices – Harold Pinter Theatre
Film Review: The Front Runner »