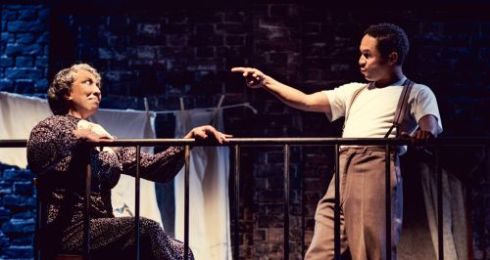 “The tyranny of women” is at the centre of Tennessee Williams first and most autobiographical play. Every time audiences see this work about family, memory and the cost of self-determination, new layers are revealed. Now, in a co-production with the Watford Palace, the Arcola Theatre has redefined Williams’s work for the twenty-first century by shifting the action to an African American household in the heart of St Louis. If this concept sounds familiar its because the Young Vic has successfully applied the same treatment to Arthur Miller in Marianne Elliott and Miranda Cromwell’s production of Death of a Salesman which opened to rave reviews. The Arcola’s version of The Glass Menagerie is sure to do the same.

A recent, and very classy, revival directed by John Tiffany played at the Duke of York’s a couple of years ago, but Femi Elufowoju jr’s new production uses the intimacy of the Arcola to set Williams’s seminal drama in an entirely new context without changing a word. Like Elliot and Cromwell’s Death of a Salesman, transposing the characters to a different type of family, entirely redraws the context in which they live. The poverty of the Wingfields, the deluded nature of their dreams and Amanda’s almost manic desperation for her daughter to find a suitable husband are further tinged with impossibility when the first tentative moves towards racial and gender equality were still decades away.

The context of Williams very domestic play is significant and while the action barely leaves the Wingfield home except to a small terrace on the fire escape, the external world of 1930s America keeps bursting in. Within the action of the play we see a continual battle between memories, dreams and reality in which each of the characters tries to come to terms with the limitations of their current lives. In one sense they all seek the ideals of the American Dream, hoping for success, happiness and family contentment that society urges them to attain, yet the truth of life in St Louis in 1937 is far uglier – Tom works in a relatively junior position in the local warehouse, while his shy and emotionally broken sister Laura has only secretarial work or marriage before her.

The great tragedy of The Glass Menagerie is how hard and fruitlessly these characters struggle to shake off the ties of the past, their abandonment by the father and husband that matriarch Amanda still idolises and her insistence on living with the customs and manners of twenty years before. Just as past and future, dreams and reality pull against one another, so too do the masculine and feminine energies of the play; in Williams famous line it is Amanda’s emotional tyranny over her children that shapes the drama, driving Tom’s need to escape her suffocation with nights at the movies, drunkenness and a flirtation with the Merchant Navy, which acts in perfect balance with the soft, quiet delicacy of Laura’s unassuming gentleness.

What is clear from Elufowoju jr’s production is the overall fragility of the world in which these characters exist; one wrong move and jobs can be lost leaving a family destitute, but they must also tread on emotional eggshells around one another, afraid to speak their minds and give voice to their true aspirations. Amanda’s rather nervy state of mind forces her children to hide truths about their lives and while she can be fearsome, nagging or shouting them into submission, this production makes clear that these behaviours come from a place of fear, one which is amplified for an African American family trying to retain respectability in a town that would never notice if they fall.

Rebecca Brower’s set does wonders with the tiny Arcola space, using the main stage as the Wingfield sitting and dining rooms that attempts refinement, while adding fire-escape staircases to utilise the permanent balcony which doubles as the vital terrace where Tom escapes to look at the moon and listen to life-giving music that emanates from the Palace dancehall across the road. Brower neatly implies the close tenement living with washing lines and other people’s windows visible on the rear wall, while the main room is a small space in which the family also sleep on rolled-out mattresses placed on the floor. The set carefully facilitates the physically confines of the Wingfield home and the emotional combustion that erupts between its three residents.

What Elufowoju jr does so well is to develop and manage the growing intensity as the action unfolds. Williams sets this up as a memory play with Tom as the conscious narrator as well as one of the lead characters. The creation of atmosphere is strongly conveyed, as Michael Abubakar’s Tom directly addresses the audience, warmly drawing us into the narrative. Arnim Friess’s lighting design creates the feel of sultry summer nights out on the fire escape, while inside the electrically lit living area burns bright until the pivotal power-cut. There is a feel of desperation and hope of a better future that Elufowoju jr sets up and knocks down as the action unfolds, using Yvonne Gilbert’s selection of nostalgic jazz music to underline both the yearning for freedom as snatches of tunes pervade the night air but also to represent the weight of the past that shackles the characters to their less gilded fate.

Lesley Ewen’s Amanda Wingfield is a complex ball of anger and frustration with her children, while reliant on the appearance of a girlish supplication that is far from a real reflection of her personality. As she describes her heyday and the arrival of numerous “gentleman callers” Ewen flirts and wheedles, imprisoned in the happy memory of her ultimate self. She falls back on those characteristics when Jim comes for dinner in Act Two, fanning herself elaborately, giggling and trying to convey a picture of sophistication and poise where only desperation remains. But beneath the all-too cracked façade, Ewen’s Amanda is a tigress, dominating her beleaguered family and unleashing furious tirades that thunder through their tiny home.

She is a frustrating character, difficult to like, full of self-delusion about her beauty and her worth, whose personality is designed to grate. Yet, Ewen unveils the psychological state that has created the monster in front of us, and in doing so renders her a little more sympathetic. Amanda may bare her teeth – a gesture Ewen introduces to reveal both determination and a lifetime of painful disappointment – but she is fragile, abandoned by the husband she managed to catch and what small gift she once possessed (or thought she did) for controlling the world.

Abubakar’s Tom is our way into the story, a frustrated hard worker forced into the man of the house role through circumstances beyond his control. As our narrator, Abubakar’s warm and inviting tone immediately welcomes the audience but also does much to create the tone of the piece, those atmospheric interjections setting the pace and feel of 1930s St Louis as he takes control of the audience’s imagination to set the scene.

Within the story, Tom’s relationship with his family is layered and complex with Abubakar finding a credible duality in his dissatisfied love for his mother and sister, accepting his duty to provide for them while dreaming of a more fulfilling future. The furious encounters with Ewen’s Amanda are particularly well performed as permanent irritation suddenly erupts when the stifling experience of the Wingfield home becomes too much for them. Of all the characters Tom looks most to the future and his need to escape, to change his life, which Abubakar explores so subtly, takes Tom to the bars and cinemas of St Louis, and ultimately to a more callous place with only self-interest and regret.

Naima Swaleh as Laura is certainly as fragile and exposed as her beloved glass ornaments, and despite an early moment of rebellion in which Laura lies about the business course she attends, Swaleh suggests an ephemeral presence, as though the character is made almost transparent by the Amanda’s dominance and Tom’s distraction. Occasionally a little mannered – although arguably the role lends itself to such an interpretation – Swaleh is at her best in the final encounter with Jim, the intensity and pathos of which wins incredible sympathy for a girl with no prospects and only further to fall.

Jim’s arrival is a turning point in the play and finally dispels the illusions of the Wingfield family setting them all on a new path. In Charlie Maher’s performance this takes on extra layers as Jim, a white Irish-American, suddenly lends fresh perspective to Williams’s words. Amanda visible falters as he appears in the dining room and despite attempts to resurrect her plan the impossibility of a relationship with Laura in this time and place is clear.

But the contrast between Jim and the Wingfield’s experience is further elucidated in Maher’s performance. Jim – like Biff in Death of a Salesman – is a former High School hero whose subsequent life has never measured up, yet his first conversation with Tom is full of arrogance, bravado even salesmanship. When he accidentally leaves devastation in his wake, the audience knows that the white boy with every privilege and opportunity will also be fine, whereas the Wingfields who struggled for every ounce of respectability ultimately have no rights or history to support them – despite Amanda’s obsession with the past, it cannot save their future.

Elufowoju jr’s production is fascinating with the tense and vibrant second half in particular proving both gripping and illuminating. With a couple more performances before Wednesday’s official press night, there’s really little to do except plug deeper into the family connections in the first few scenes. Williams does a lot of the work for you in The Glass Menagerie creating a combustible environment and unhappy but somewhat compassionate characters about to hit the point of no return, but Elufowoju jr’s has reframed the play entirely, showing us that for the African American Wingfields clinging to what society they can the tyranny of one woman is disastrous.