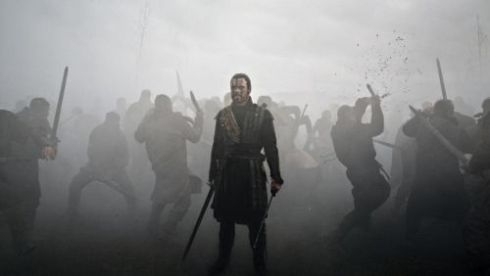 All. Hail. Macbeth. I’m not usually one for sweeping or grandiose statements but this new film version of Macbeth means I can feel a couple coming on. Here we go – this is the best Shakespeare film ever made and the best version of Macbeth I have ever seen on stage or screen. Macbeth is one of Shakespeare’s most incredible plays and over the years I’ve seen a number of professional and fringe productions, but somehow none of them has ever produced the kind of reaction I’d hoped for. The intensity of the story and how Shakespeare builds the sense of threat should feel devastating and I’ve longed to see a production that grabs you by the throat at the beginning before turning you out onto the London streets dazed and wrecked by what you’ve seen. I’ve been entertained, engaged and disappointed but never subsumed… until now.

There are three core questions that any production must ask itself – whatever choice the company makes is fine as long as they choose and are consistent about applying it. First, what is the role of the supernatural, are the witches real and does their prophecy pre-determine Macbeth’s future beyond his control or do they merely cement his own human agency? Second which of the Macbeths is driving events, is it him with support or does Lady Macbeth convince him to do something against his own will? Finally is Macbeth motivated by power and greed, does he commit countless murders because his human frailty cannot displease his wife or is he essentially evil? Many a production has failed by not making the decisions on day one, and what is so spectacular about Justin Kurzel’s new film is not just that they choose a clear path but it is beautifully realised and reinforced throughout the film.

In a recent interview Kurzel explained that Shakespeare on film often feels a little staid because they start with the beauty of the language and try to fit the rest of the action around it. But what works on stage can be stilted on screen. Instead Kurzel began with the characters, working with the cast to discover who they were, where they came from and what they wanted, so that the language and their speeches should evolve ‘organically’ from their personality. This approach gives a real power to the events depicted and at every point you feel you’re watching living, breathing people who feel entirely believable. The enormous tragedy of Macbeth becomes an immensely affecting disaster that you live with the characters so as the brutality increases to what is here both an epic and timeless conclusion, you’re completely bereft as the credits roll. Like I say, best Shakespeare film ever.

It uses two core themes that serve to explain not just the context in which the characters exist but also the psychology of their behaviour. It opens with the funeral of the Macbeths’ only son, a pagan-like festival, almost Viking in its feel that immediately places our protagonists in the midst of an intense grief. Throughout we see children playing in the fields outside, attending events with their fathers and in a nod to Henry V, fresh-faced teenagers fighting and dying in Macbeth’s army, for Macbeth’s cause. And there is a shocking moment involving children that will be familiar to Game of Thrones fans. Kurzel has taken a rather oblique reference to the death of the Macbeths’ child and brilliantly used that as the spearhead of their motivation. The fears about producing an heir, so commonplace in medieval and early-modern kingship, add heft to Macbeth’s actions in a futile attempt to defy the prophecy that Banquo’s sons, not his, will inherit the crown. Likewise, viewing Lady Macbeth as a grieving mother helps to explain her ambition for a better place, a woman expected amongst her rank to produce heirs, failing to do so and clawing at other entrapments – fascinating.

The second theme is the effects of warfare and the nature of living in a combatant society. What is so so brilliant about this film is the observation it makes about warfare, here depicted in a medieval setting, but so contemporary in its comment about the confusing effects of conflict on the individual, referencing both ideas of manly behaviour and expectation, as well as the emotional consequences of killing and seeing your comrades killed. In Michael Fassbender’s incredible performance we see that Macbeth’s reluctance to murder Duncan comes from this notion that killing on the battlefield for a noble purpose is one thing, but doing it in cold blood in peacetime for personal ends is quite another. Even better, his mind then fails to make a distinction between the two and begins to reel with a combined survivor’s and murderer’s guilt as the ghosts of the men he led to die, now fruitlessly, for Duncan’s cause, as well as those he destroyed for his own, haunt him.

The film is bookended by some of the most extraordinary fight scenes you’ll ever see. The first follows swiftly from the child’s funeral to put the grieving Macbeth in the thick of the action with the camera right in the heart of it all as men clash and flail. Then Macbeth is still as the battle rages around him in slow motion, and the 3 witches appear to him (with an added child witch to reinforce that theme), so the audience knows in that moment his fate is sealed. Amazingly Kurzel and his crew top this for the final confrontation between Macbeth and his aggressor Macduff, which neatly addresses the movement of Birnam Wood towards Dunsinane, and takes place against a landscape filled with orange smoke with flecks of ash pouring across the scene in the wind. It’s visually stunning and epic, a little reminiscent of Skyfall’s final set-piece as Bond rushed through the coloured haze of the moors to save M, and clearly implies a new era of battle depiction that can look simultaneously fierce and lyrically beautiful. The ending too poignantly reminds us that conflict is never over and as one King assumes the throne, another rises to take his place.

And so to the performances; I could gush for hours about how wonderful an actor Fassbender is and I can’t think of a single time he’s given anything less than a commanding performance. People have mixed feelings about films like The Counselor and Prometheus but Fassbender was still wonderful in them. His ability to entirely inhabit a character, to absolutely become them means he can give a performance of considerable depth whether he’s playing a suspect in Poirot, a comic book anti-hero in X-Men or as an emotionally cold sex-addict in Shame. And he is Macbeth and I mean he absolutely is Macbeth. It’s a tough role and unlike others the pitch of it must waver along with the story. He doesn’t start on a high and fall down, or start low and progress linearly, but alters throughout. Fassbender is so utterly magnificent in this role because the audience follows the twisted path with him, starting as a loyal warrior, before he is overcome with anxiety about the murder he commits in a moment of savagery but with tears in his eyes – a phenomenal depiction of conflicting emotion. After it’s done, rather than revelling in his new kingship, he is broken with guilt and fear, seeing ghosts and slumped on the floor of his new palace. Yet he rises again after the witches confirm no man born of woman can destroy him so his confidence soars, pushing his wife aside and, so certain of his destiny, committing tyrannous acts. The bubble finally bursts again in the final battle and realisation dawns on his face with the subtlest flicker as he succumbs to inevitability. All of this is in Fassbender’s electrifying performance and it’s astonishing to watch. The only thing that should be standing between him and an Oscar is possibly his other film, Steve Jobs.

Marion Cotillard is perfectly matched as Lady Macbeth, the arbiter of the plan in this version. There is something quite ethereal about her that sets her apart from the others. Partly it’s the semi-French accent (it was quite common for European royal houses to inter-marry) but her initial grief sets her apart from the other characters so we only see her properly interact with her husband and no one else, which gives weight to the nature of their conspiracy. The scenes between them pulsate with tension as they drive each other to act and Cotillard shrewdly shows her Lady Macbeth channelling her frustrated motherhood and pain into an act of regicide which eventually has devastating consequences for herself. The supporting cast is wonderful to; David Thewlis makes a brief appearance as a bounteous and likeable Duncan, while Paddy Considine’s Banquo silently reeks of disappointment and fear of his friend. Sean Harris arrives quite late on but makes a big impression as the pinched and vengeful Macduff.

Everything about this film has been so carefully thought through and the evidence of that comes across spectacularly on screen. Kurzel has created a completely compelling film that, as all good five star productions should, leaves you both in awe and utterly drained. It is so atmospheric and throbs with danger and tension all the way through – you cannot take your eyes off the screen. It is the production of Macbeth that I have waited for and if this cast could reconvene on a London stage anytime soon that would make this even more amazing. I cannot wait to see this again, in fact I’m off to find another screening now, who’s coming?

Macbeth is released in cinemas nationwide on Friday 2nd October. You should really really go! Follow this blog on Twitter @culturalcap1