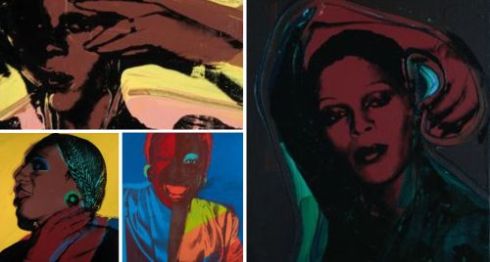 The Tate Modern’s Andy Warhol exhibition was only open for a short time before the Covid pandemic forced the gallery’s closure for five months. Reopened again recently and extended until November, attendance is now a well-managed if cautious experience as the Tate responds to social distancing and safety guidelines that reduces visitor traffic and encourages face-coverings in all areas of the building. For those who have also visited the free-to-access collections at the reopened National Gallery, Wallace Collection, Tate Britain and others, there is much to compare and contrast in their approaches, and while 5 months ago wearing a mask in a gallery may have implied you were mid-heist, more space in previously over-crowded exhibitions is a welcome development.

One of the major considerations affecting the production and display of artistic objects in the last few years has been an increased engagement with the socio-political (and sometimes even harmful) context in which culture is created. The open discussion of these experiences was fairly new to television, film, theatre and dance where the exposure of high-profile predators led to resignations and formal charges that we hope will result in new ways of working to safeguard and protect members of cast and crew. But it resulted in a new, and as yet unresolved conversation, about the value of pre-existing output. Where do we draw the line between the cultural artifact and the separate-but-related life of its creator; how much room should we give to art shaped by the values and influences of the period in which it was created if attitudes, language and behaviours were quite different to our own and can art ever be separated from the artist?

Consciously or not, the creation and consumption of art is a political act, filled with the nuances of time, place, gender, race and numerous other characteristics that shape the circumstances in which it is generated and shared. This is something that the Art industry has had longer to grapple with, with conversations taking place over a number of years as galleries feel an increasing responsibility to contextualise items on display with the less salubrious and sometimes troubling biography of the creator. Notably in Two Temple Place’s exhibition Sussex Modernism: Retreat and Rebellion in 2018, the sculptor Eric Gill came under particular scrutiny for his work showing a pubescent girl known to be his daughter. The object was accompanied by a description that indicated his unhealthy relationship with her, one that affected and changed your opinion on the piece itself, a skilled example of statuary muddied by the environment of its creation.

None of this is surely relevant to the Pop Art images of celebrities and politicians that Warhol’s work reproduced? But room nine in the Tate Modern’s exhibition is the place to suddenly ponder these questions as the viewer is confronted by a series on Drag Queens and trans women entitled Ladies and Gentlemen focusing on Black and Latinx communities. It throws everything else you have seen into sharp relief. Displayed for the first time in 30 years, this is beautiful work – arguably some of the best pieces Warhol made – full of life, colour and drama in which the vibrancy and energy of the subjects shine through. Yet the Tate is at pains to point out that aside from a nominal fee, little is known about the sitters lives, nor were they able to control or influence the distribution of the resulting images, issues that apply to lots of models down the centuries. 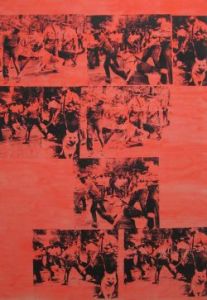 But in highlighting the transactional nature of this collaboration in which Warhol procured subjects he didn’t know and didn’t record it leaves us with (as the Tate exhibition notes explain) ‘questions about the ethics of the series’ that speak to our current concerns with trans discrimination and rights. Although a commissioned collection, Warhol was clearly drawn to the fascinating lives, personalities and experiences of his subjects, the vivid power of the paintings themselves are testament to that, but it is impossible to know how engaged he was in representing the sitters as they were and wanted to be seen, or indeed if the subjects then or later objected to the finished pictures.  And while not his intention, Warhol’s work now takes on an added political resonance asking the viewer to wonder about the ways in which whole communities are excised from history, the nature of identity and ultimately the independent male gaze in perceiving and relaying an experience he was not part of.

Casting back through the eight earlier rooms then becomes a more contemplative experience and you are constantly reminded that while art can stand apart from era it also exists both within the specific conditions under which it was created fed by the artists’ biography and social experience, but also, importantly, in the context in which it is viewed. Our relationship with the work is informed as much by our own influences and values as the creators, which continue to change over time as individuals revisiting work over a lifetime and as different viewers engaging with a piece across the decades or centuries.

All of this feeds nicely into the curators’ argument that Andy Warhol’s work became influential during a period of significant socio-political change, both shaping his art and being created as a direct response to it. Looking back to the 1960s, Pop is the third room in this chronologically arranged exhibition containing many of his most famous pieces, the ones that subsequently come to define our impression of his wider canon. It may seem strange, even counter-productive to offer up the Marilyns and Marlons so soon but the distorting effect that Warhol creates on his canvases is rendered in equal measure by your passage through the show, encouraging you to reflect further on these works in the light of later pieces.

So, as Warhol’s work looks at the commodification of image, repackaged as a sellable product and society’s shift towards indiscriminate consumption, the decaying effect of these activities becomes more sharply defined. Your eye is drawn to the colourful half of Marilyn Diptych (1962), although distorted and repackaged, the beaming glamour of her star power given eternity on Warhol’s canvas. Yet, created after her death, the faded black and white print of the other half suddenly seems more powerful, slowly erasing Marilyn the woman completely and this spectre of absence is notable in the room’s other pieces.

Two shots of a masculine Brando fill half the canvas leaving the remainder blank and uncoloured, the spaced-out Elvises are vibrantly painted but the canyon between them feels noteworthy, while the images of Jacqueline Kennedy – strategically placed alongside supposed rival Monroe – cast her either side of the death of John F Kennedy, the grainy smile arriving in Dallas cut pointedly alongside the veiled widow at the funeral. The absence in this image feels as profound as the inferred inevitability of the assassination that Warhol’s composition implies.

But what really makes this room so reflective are the political newsreel images that candidly and deliberately sit alongside celebrities that note the violent underbelly and decomposition of American society. The astonishing replication of a women throwing herself from a tall building  and captured in mid-air (Death and Destruction) is hard to look at, as is the vicious taunting of black protesters during the Alabama race riots as an Alsatian strains at the leash. Warhol uses colour to reflect danger and drama in the moment while the large-scale images of convicted criminals directly opposite Brando makes a subtle connection between the worlds of Hollywood and organised crime. America was rotten, so while you look at the repetitive patterning of Coke bottles or soup cans, Marilyn’s lips or the lurid poppies, there is something uneasy and unstoppable about the way in which Warhol has loaded his work with a kind of destructive symbolism.

Later these messages become more overtly political as Warhol applies his screen-printing technique to images of world leaders and notable emblems, particularly those pertaining to Communism as the vividly painted image of Mao from the 1970s as well as the Hammer and Sickle series were developed in response to America’s closer relations with China. In the penultimate room, these become even more daring as a devilish rendering of Lenin in bright red dominates the Mortal Coil section from the 1980s and in the same room the Statue of Liberty has been layered with a lightly tinted camouflage pattern across the entire scene that subtly implies a warmongering nation hiding behind notions of freedom. But Warhol’s relationship to these works is harder to fathom, are they celebratory or concerned? Either way they suggest a decade-long fascination with the iconography of political leaders and ideologies.

Throughout the exhibition, there is a concurrent sense of Warhol both closing down and expanding as he became personally more cautious following his 1968 shooting and artistically more experimental. The confident film reel-styling of the Pop Art years led to an interest in film making and the music scene so the curators focus on magazines, books and record sleeves produced and designed by Warhol as well as large-scale prints of stars he socialised with through the Studio 54 network including Debbie Harry and Grace Jones. Exposures reveals a division between profitable employment and more innovative practices – much as the Tate Britain’s William Blake exhibition united the artists commensurate commercial printmaking business with his more fantastical personal pieces – placing work emerging from his hectic social life alongside Oxidation, an abstract bronze-effect piece created from urine-infused metallic paint that retains a corroded effect – there is nothing else like this in the show, and along with the famous faces and the expressive colour-filled pictures this is a side to Warhol’s work that could be better explored and explained.

As a socially-distanced gallery experience, Tate Modern have managed their extensive space well with separate queues and doors for the general collection, Warhol and McQueen exhibitions. Once inside,  apart from a couple of rooms with very limited spaces and the removal of the touchable pillows of inflated silver evident in the photography from March, the smaller number of visitors mean restrictions rarely impede your progress through this thoughtful show. There have been bigger and more comprehensive Warhol exhibitions in the UK but this one will certainly get you thinking how the meaning of art can change between creation and display.

Andy Warhol is at The Tate Modern until 15 November. Tickets are £22 and concession are available. Follow this blog on Twitter @culturalcap1 or Facebook Cultural Capital Theatre Blog