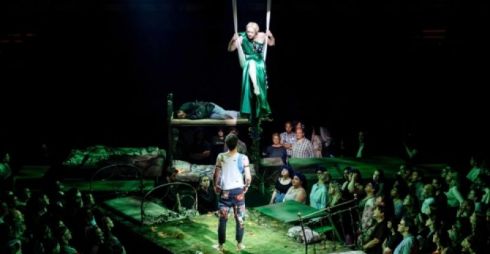 A Midsummer Night’s Dream may be a perennial favourite, a light romantic comedy of tampered relationships and fairy magic, but on closer inspection it’s not quite the harmless fun that we think it is. Last year, The Faction gave us a darker interpretation, full of sinister woodland creatures and lurking danger amplified by the shadowy gloom of Wilton’s Music Hall, insisting that meddling sprites were spiteful interlopers keen to disrupt the human world. Now, Nicholas Hytner’s immersive production at the Bridge Theatre has a new dimension to add, one that highlights and rectifies the shameful treatment of women in the play.

It has been another difficult year for the Bridge, with new play commissions continuing the theatre’s disappointing run. Nightfall, Alys, Always and Allelujah! opened to lukewarm reviews while the much-anticipated A Very Very Dark Matter from the celebrated pen of Martin McDonagh was an anger-inducing waste of major theatre space. No wonder then that Hytner and co. have gone back to the Bridge’s only true smash hit for inspiration.

It may have been established to house new work but it fell to an ever-reliable writer called William Shakespeare to save the day, and last February the Bridge Theatre unveiled its immersive production of Julius Caesar – an innovative and tub-thumping triumph that was everything theatre should be. Energised by its judicious two-hour run-time, excellent performances and smart design, Hytner’s approach was both slick and full of staging surprises that played well to its in-the-round audience whether seated or part of the crowd in the pit.

Hytner adopts a lot of the same methods for A Midsummer Night’s Dream and achieves much the same, although perhaps an ever so slightly less rousing, effect with spectacle aplenty and some wonderful comic performances that shake-up a tired play. But it is the slight rearrangement of the text and its implication for the female characters that is Hytner’s most notable achievement here, adding additional perspectives on the social structures of Shakespeare’s piece while making greater sense of the overall story.

It opens in a grey dystopian world, Hippolyta dressed in nun-like garb is trapped in a glass box listening to a choral choir as the audience take their places. Soon the severe Theseus speaks in solemn tones about his forthcoming wedding to the bride he won in battle – a throwaway line that’s easy to miss – a dynastic union of conquest and humiliation for the ensnared Queen. Christina Cunningham’s costumes nod to The Handmaid’s Tale as the women cover their hair with a scarf and dress in loose-fitting uniforms that demand their subservience and silence.

Normally it is the men who run this play, Theseus and Egeus decide who The Lovers should marry, while in the play’s fantastical middle section it is the jealous Oberon who enchants Titania so she humiliatingly cavorts with the ass-headed Bottom, while impish Puck mistakenly bewitches the wrong man resulting in frustration and further indignities for Helena and Hermia. Hytner however subverts the way in which these magical ministrations play upon the feelings of the women by partially transposing the characters of Oberon and Titania to political and comic effect.

After fighting over the changeling boy, it is Titania who decides to teach Oberon a lesson by dowsing his sleeping eyes with a magical flower so that he falls in love with Bottom instead. The result is hilarious in a production that hints at sexual fluidity in several characters and makes for an unusual but very smart re-imagining of the play’s core comic scenes in which Oliver Chris as Oberon and Hammed Animashaun are delightfully funny. But this well-judged silliness holds a deeper meaning, and Hytner uses these woodland antics to underscore the revolution taking place back in Athens in which women are liberated from their secondary role. With Theseus and Oberon essentially the same character, the events of this midsummer night in which Hippolyta/Titania decides to teach him a lesson before she can marry him, start to make perfect sense in this slightly amended narrative arc. The result is a captured Queen regarded now as an equal rather than a prize.

It is a notable change to the original play but one that brings a fresh, more contemporary feel to the play’s major relationships without altering the overall plot or even much of Shakespeare’s original text. A Midsummer Night’s Dream can bear such playful rearrangement and in a year where two other professional productions lay ahead at The Globe and Regent’s Park Open Air Theatre, one or both will surely provide a more traditional approach for purists. And it’s reassuring to know that such a well-known play can still yield plenty of insight with a little fairy ingenuity.

Equally impressive is Bunny Christie’s wonderful set, and as with Julius Caesar last year a variety of small block stages rise from different points in the floor to create variety and a dynamic energy within the show. But the magical elements of A Midsummer Night’s Dream are also explored using several iron bedsteads (focusing on the title’s final word – dream) that appear around the room on which the various relationship pairings will sleep and be drugged. As the action unfolds, these become increasingly entwined with the forest as vines and flowers wrap around the frame and, after a quick change at the interval, a maze-like structure of bunkbeds, grassy patches, mattresses and single bed frames link together through the centre of the pit to create the confusing woodland layout.

But Christie has even more tricks to entertain us and so the fairies become circus performers suspended from the ceiling on loops of cloth in which they can perform a gymnastic display above the heads of the pit crowd. At several points Titania and Puck watch and guide the action from the air, while the fairies perform a full acrobatic routine during the interval to reinforce the immersive magic of the overall production. Beds too rise into the air as sleeping lovers are placed on pause while other activities take place. These carefully choreographed and well executed sequences are delightful, while the complex transitions are really well managed by the creative and technical team who create an effortlessly busy and fairy-tale effect.

Already a very fine comic actor, Oliver Chris has a particular ear for Shakespeare’s rhythms and his Oberon is one of this production’s most successful choices. His overly enamoured fairy King is perfectly pitched mining different aspects of Shakespeare’s comedy to maximise all the hilarity of the love affair with Bottom. The earnest and exuberant enthusiasm with which Chris delivers lines that elsewhere belong to Titania contrast brilliantly with the equal solemnity of his Theseus, a grave and joyless man leading a dangerous state. Yet it is the visual comedy that so well underscores this middle section of the play without distracting from Shakespeare’s characterisation, and whether cavorting with Bottom in a variety of comic guises or revealing the shy and bold characteristics of his enchanted love, Chris delivers a well-balanced physical and intellectual performance that is a highlight of the evening.

His fairy Queen Titania, played by Gwendoline Christie, is a commanding presence enacting her mischievous plan not just for her own amusement – as a straightforwardly gendered production suggests – but to reveal the limitations of Theseus/Oberon’s view of the world. Christie is simultaneously an ethereal presence in her sweeping green gown (a stunning creation by Cunningham) and a warrior Queen. The continuity of character from the captured Hippolyta who may be the spoils of war but whose power to change the course of the action is undiminished as she becomes the revenge-taking Titania has a nice clarity in Christie’s performance, making greater sense of the play’s happier ending once her future husband has been tamed by her power rather this his army.

The Lovers are difficult, often quite tepid roles but Isis Hainsworth’s Hermia, Kit Young’s Lysander, Paul Adeyefa’s Demetrius and Tessa Bonham Jones as Helena form a more interesting quartet than often seen, driven by different lusts and moments of sexual fluidity that reveal the extent of the fairies’ meddling, while David Moorst channels a bit of Lee Evans in his servile but cheeky Puck who feels equally at home as an otherworldly presence on the circus ropes as he does down in the pit bantering with audience members failing to make way for him.

The Rude Mechanicals can be one of the hardest sections of the play to get right and the final enactment of the Pyramus and Thisbe tale a late-stage distraction that prolongs our home time. Not so in this production where the enthusiastic amateur players become a unified comic force in their matching sweatshirts (very Pitch Perfect) while retaining just enough individuality to distinguish between them. Led by Felicity Montagu’s Quince the jealousies and frustrations of this little group are revealed, but it is Animashaun’s interpretation of Bottom that invariably steals all the best lines, building a rapport with the audience that lasts right through the play-within-a-play. Bottom’s lack of self-awareness about his acting ability within the Mechanicals and his physical attractiveness as a lover is very funny, and Animashaun’s chemistry with Chris adds so much to their scenes together. Perhaps the most surprising achievement is how well the actors work together to make that final scene genuinely funny with a few extra nods to the in-the-round and immersive nature of this production that send the audience home on a high.

Hytner’s production is not quite as good as last year’s Julius Caesar, partly because it’s a better play than A Midsummer Night’s Dream but also, to a degree, the novelty of the immersive staging has a touch less impact the second time around. It’s also not as slick with the advertised run-time already adding 10-minutes to make it 2 hours and 50 minutes currently. Nonetheless, Hytner always directs Shakespeare so well, and his approach to the text offers considered and genuinely interesting insight as well as more than enough spectacle to reinforce the play’s magical quality. The Bridge Theatre has made these immersive productions its own, and unlike the usual proscenium arrangement that flattens all their new work, the energy and excitement of these immersive shows is fully engaging whether you are seated or standing in the pit. There are a few more version of A Midsummer Night’s Dream to come before the summer is out, but it’s unlikely there’ll be a better one than this.

A Midsummer Night’s Dream is at the Bridge Theatre until 31st August with seated of standing tickets from £15. Follow this blog on Twitter @culturalcap1 or Facebook: Cultural Capital Theatre Blog